The 2019 Hyundai Kona Electric Is a Bolt of Inspiration 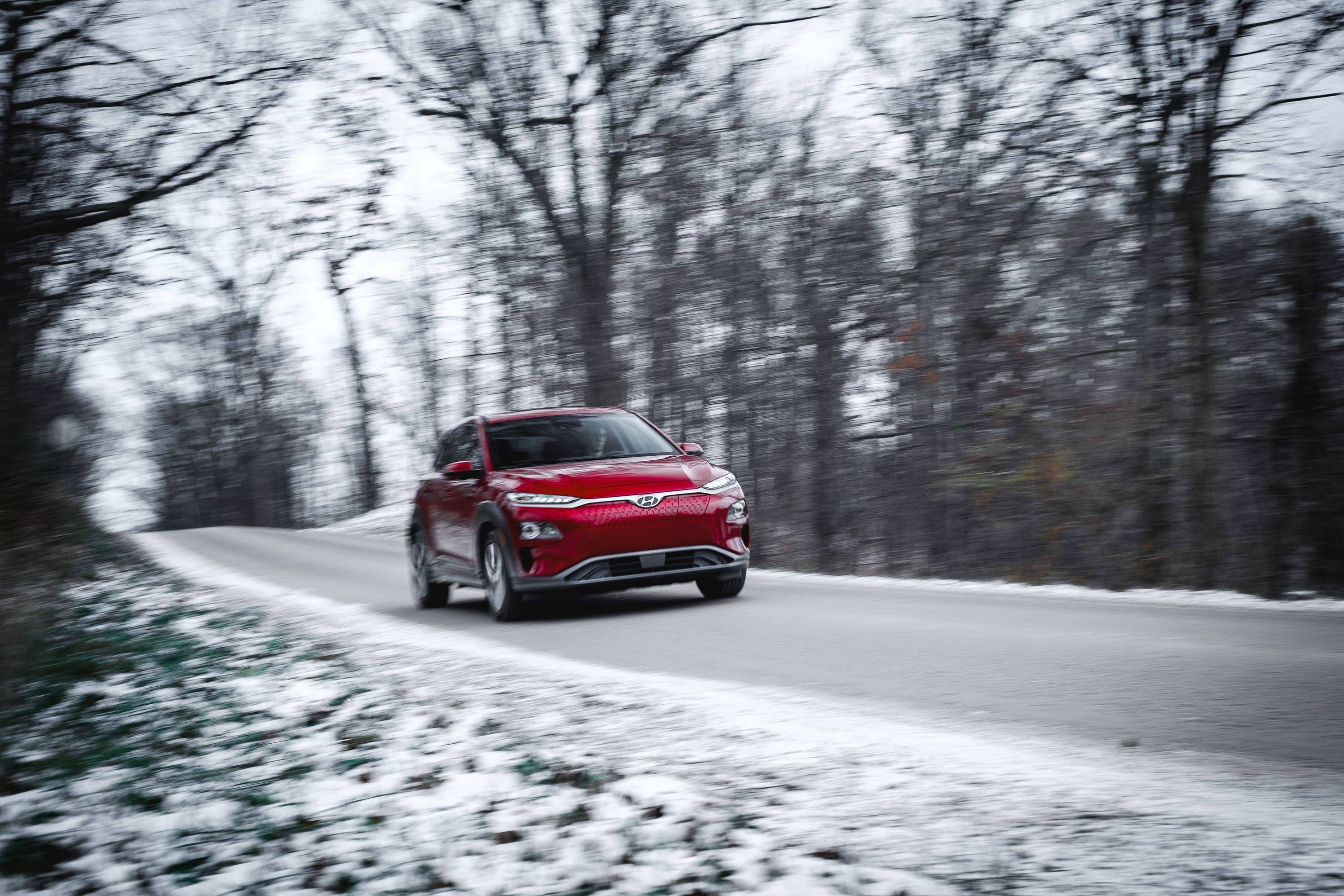 If you are considering an electric vehicle, you might want to draw up a new shopping list. And you should probably pencil in the Hyundai Kona Electric on the first line. The gasoline-burning Kona is among the best subcompact crossovers on the market, with adventurous styling, a powerful available turbocharged engine, and excellent driving dynamics. The battery-powered version doubles down on each of these traits. It is more beguiling to look at, its design a bit less extroverted than that of the standard Kona. The electric motor produces more power and much more torque than the internal-combustion engine in even the top-of-the-line turbocharged Kona. And a lower center of gravity gives the Kona Electric an athleticism that's rare in this class of vehicle.

You can spot the electric version by its front fascia, which has only the illusion of a grille; behind it lurks its charging port and a handy state-of-charge indicator. The cladding around the headlights of the standard Kona has also been removed, which cleans up the front end nicely. Inside, the changes are more obvious: The shifter has gone missing, replaced with push-button transmission controls atop an elevated center console that also contains a pair of cupholders and hides an open storage area underneath. The electric version of the Kona was planned from the outset, so none of its powertrain intrudes on the cabin or the cargo hold. Passenger-volume and cargo-space measurements are almost identical to those of the gasoline version, meaning the Kona Electric has a somewhat cramped back seat and can't swallow much luggage. It is, after all, a subcompact crossover that's just 164.6 inches long.

Under the Kona Electric's hood sits its 201-hp permanent-magnet synchronous AC motor, which drives the front wheels through a single-speed transaxle. Compared with the turbocharged 1.6-liter inline-four available in the standard Kona, the electric version's 201 horsepower and 290 lb-ft of torque represent increases of 26 ponies and 95 lb-ft. This is more torque than its 17-inch front tires can handle sometimes, and an aggressive launch will activate the traction control.

But keep the wheelspin in check and the Kona Electric will hit 60 mph in 6.4 seconds, an impressive 0.2 second quicker than the all-wheel-drive Kona 1.6T. That advantage is maintained through the quarter-mile, which the Kona Electric ran in 15.0 seconds flat, hitting 94 mph.

The Kona Electric's sportiness is complemented by aggressive regenerative braking. Hyundai has deployed a driver-selectable regenerative-braking setup similar to the one in its Ioniq EV. Paddles behind the steering wheel allow the Kona Electric's pilot to cycle through four levels of regen—plus a fifth maximum mode that tops out at 0.25 g of deceleration, according to Hyundai, but only when the driver is holding down the left paddle. This allows for true one-pedal driving that could be more engaging than Tesla's, if not for Hyundai's use of blended braking. While Tesla allows the brake pedal on its cars to control the friction brakes independently of the electric motor's regeneration, Hyundai, like most carmakers, insists on using the brake pedal to first initiate the deceleration that comes with electric regeneration before gradually blending in friction braking. This makes it difficult to find the point in the travel at which the brake pedal starts working the actual brakes. Hyundai also offers an automatic mode that varies the level of regeneration to produce a consistent rate of deceleration regardless of road grade; turning it on gives the Kona Electric a feeling while coasting that is similar to that of an internal-combustion vehicle during engine braking.

The regenerative-braking system doesn't influence stopping distances during testing, with the Kona Electric stopping from 70 mph in 173 feet. That compares well to the Kona 1.6-liter's 171-foot stop, considering the EV's extra weight and smaller tires. The Kona Electric weighs 3767 pounds, which is a significant 517 more than the AWD 1.6T.

Although the Kona Electric's 6.2 inches of ground clearance (0.8 inch less than the standard version) won't make it much of a rock crawler, more of its mass sits lower, making it feel better connected to the road. Hidden beneath the floor, the 64.0-kWh lithium-ion battery pack shifts the Kona Electric's center of gravity 3.6 inches closer to the pavement, to 20.3 inches, according to Hyundai. That's closer to a sports car's center of gravity than an SUV's. While this doesn't turn the Kona into a sports car, it does make the little crossover fun to hustle down canyon roads, especially in its Sport driving mode, which adds some weight to the steering and perks up the motor response.

The Kona Electric has three other driving modes: Normal, Eco, and Eco+. This last one is for use when range anxiety turns to range desperation, shutting off the climate-control system to maximize miles. It seems unlikely that this feature will have much utility, given that the Kona Electric boasts a 258-mile EPA range estimate. This is currently the longest of any non-Tesla electric car, beating out the Chevrolet Bolt EV (238 miles) as well as the new Jaguar I-Pace (234). And if Tesla ever gets around to selling its base-powertrain Model 3—the mythical "$35,000" one—the Kona Electric should put that Tesla's 220-mile range to shame as well.

Below-freezing temperatures didn't stop us from running the Kona Electric on our 75-mph highway fuel-economy test, where the EV got 86 MPGe and delivered a range of 160 miles. For comparison, the Bolt in cold weather managed a 140-mile range. In fairer weather, the Bolt can go 180 miles at 75 mph and the I-Pace can go 170. The Kona Electric did achieve 88 MPGe overall, compared to 102 for the Bolt and just 66 for the I-Pace.

The Kona Electric carries few caveats. None of the technological corner cutting other manufacturers have employed to reduce costs is present here—its battery pack has a liquid heating-and-cooling circuit to improve efficiency and carries what Hyundai is calling a lifetime warranty. All Kona Electrics are equipped with a 7.2-kW onboard charger, and they all support DC fast charging as well, although the SAE Combo Charging System (CCS) that Hyundai uses is nowhere near as common as Tesla's proprietary Supercharger network, and few CCS stations today can charge at the highest, 100-kW rate. The Kona Electric is well equipped, including standard passive entry and push-button start, heated seats, two USB ports, Apple CarPlay and Android Auto compatibility, and Hyundai's Blue Link connected-car system, which allows owners to remotely control charging and climate-control settings with a smartphone. It seems worth mentioning again that the Kona Electric is a subcompact crossover, a vehicle type currently experiencing a popularity rivaled only by beer and YouTube cat videos.

When the Kona Electric goes on sale in early 2019, we expect it will start at about $37,000 before the $7500 federal tax credit. Hyundai says it will sell the Kona Electric in California first and then expand sales to the other CARB states. (Buyers elsewhere should be able to order one.) Coincidentally—or perhaps not—the Kona Electric arrives in the first quarter in which Tesla buyers will see their tax credit reduced by 50 percent, the beginning of a yearlong phaseout in which it is cut in half again in July. The arrival of such a well-executed long-range electric vehicle, one that is truly affordable, should be enough to tempt at least some of the starry-eyed dreamers waiting for a low-cost Tesla. Or anyone else, for that matter.